A Tale of Two (coastal) Cities

I have made contrasts between the Northern Oregon Coast and the Long Beach Peninsula numerous times on this very blog. Despite the relatively similar geography there are some notable differences between the two areas.

From a real estate perspective there is a significant chasm in the median home price and this will always lead to questions of value. Does the more expensive Oregon Coast offer enough real difference to justify the much higher price? 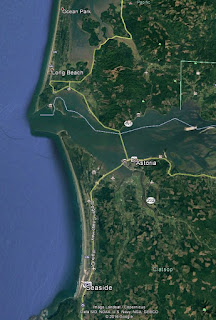 Today I spin a tale of two coastal cities. Seaside, Oregon versus Long Beach, Washington.
Let's be clear here, according to the Regional Multiple Listing Service, of which I am a member, over the last six months, the median price for a home in Long Beach is $140k and in Seaside it is $264k. To be fair, most properties on the Washington Coast are listed on the Northwest MLS based in Seattle and when those figures are added in the median in Long Beach rises to around $160-170k. Whichever number the gap is immense. Why such a big difference, what is happening in Seaside that isn't in Long Beach?

There are a great many variables in this equation and there is no simple answer. I still believe the primary driver in Oregon is the huge statewide and national marketing campaign to promote the Oregon Coast. There is tremendous national recognition of the Oregon Coast. Oregon has a gorgeous and very accessible coast line with some 363 miles of beautiful and mostly rugged Pacific Ocean shoreline. The entire Oregon Coast is serviced by federal highway, US101.

The Washington Coast in severe contrast is half the size with about 158 miles of Pacific Ocean shoreline and roughly half of that is protected by the Olympic National Park. The National Park is great, believe me, I think the Olympic Coast is spectacular! But obviously it isn't a place you can by a beach house! Washington really only has about 60 miles of livable coastal beach area, There are three specific areas that are a bit broken up by the topography. The Long Beach Peninsula which is about 30 miles long, and has a dead end terminus at the north end. The middle section features the town of Westport and 20 miles of beach but it is on a bit of an "island", not literally, but figuratively. To the north is the bay that Grays Harbor and Aberdeen are in and there is no crossing point at the coast. A similar dilemma in the South as there is no coastal crossing from the top of Long Beach. Ocean Shores lies at the north end of the southern Washington coast and abuts the Olympic Coast. Washington's coast is not really an easy contiguous driving experience.

As for Long Beach, it is relatively remote. Seattle residents looking for a romp on the beach are much better served by Ocean Shores or Westport, which is much closer. These destinations are 2 hours from Seattle and you'll need an extra hour to get to Long Beach.

Portland residents are better served by northern Oregon Coast which is only 90 minutes away. Poor little Long Beach is a bit of a bastard stepchild in the pecking order of coastal prominence. But is it "deserved" and does it matter for prospective buyers?

The decision to spend more money to live in seaside and even more yet in the charming hamlet of Cannon Beach depends on the person, really. The residents of the Oregon Coast benefit from it's fame in that there are a tremendous number of activities and attractions to support the massive amounts of tourist that flock to the coast every year. Those very same masses are also a potential negative. They bring more traffic, crowds, and elevated prices on day to day goods and services.

The city of Seaside has a fabulous beach that has a bit of a SoCal vibe, with a boardwalk (concrete), hotels right off the sand, and a nice beach town shopping, attraction area. In the summer there are life guards watching over the beach as well as volleyball and other classic beach events.

Long Beach does offer a drive on beach and in fact the whole 30 plus miles of beach are a state highway. The Long beach peninsula has a fairly large sandy, grassy area between the city and the actual beach so it is a bit of a trek from the town to the water. About a 1/4 mile in fact. The actual town of Long Beach is not quite as touristy as nearby seaside, but is still a load of fun.

Seaside is 33 miles from Long Beach and the drive will take abut 45 minutes. The historic city of Astoria is about equidistant from either. Frankly, I find it hard to justify the greater expense of Seaside versus Long Beach. Long Beach is a bit more reserved and a bit less 'fancy' but it is every bit a beach town and looks and plays the part well. Unless one is going to Portland often, Seaside is not the better of the two for those looking to buy a beach house. I can drive an extra 30-40 minutes two or three times a month on a ride into Portland to save a 100 large on my house. Just saying.